71 journalists killed in Pakistan since 2001: report 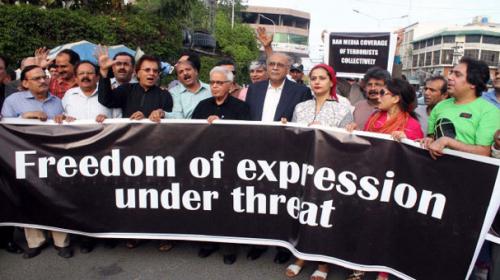 At least 71 journalists and media workers have lost their lives since 2001 while pursuing their duties in Pakistan, said a report released as the United Nations marks as the International Day to End Impunity for Crimes against Journalists.

"Of these, 47 have been deliberately targeted and murdered for practicing their profession, while others were killed while covering dangerous assignments. In only two cases have the murderers been convicted by the courts. Details of violence against media since 2001 are given below," said the report released by the Pakistan Press Foundation (PPF), highlighting the impunity attackers and murderers of journalists enjoy in Pakistan, undermining freedom of expression in the country. 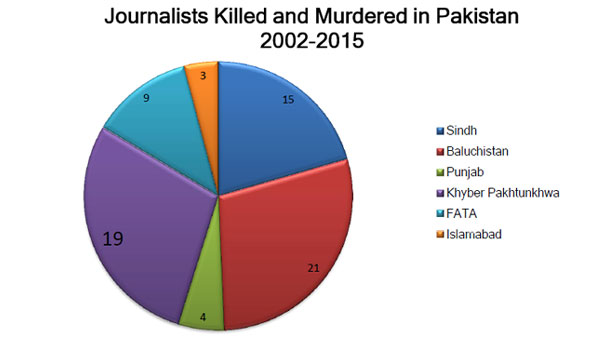 In the past decade, over 700 journalists have been killed around the world merely for doing their job. Recent years have been worse, with 2012 and 2013 ranking amongst the most brutal years for journalists.

Pakistan ranks as the fifth worst country in the world in terms of the number of unresolved cases of violence against journalists. There are still at least 22 such cases open in Pakistan.

"Pakistan is amongst the most dangerous countries of the world for journalists and it has become difficult for media personnel to work in a secure atmosphere," said the report.

"Because of the Afghanistan war, the areas bordering Afghanistan; including Khyber Pakhtunkhwa, Balochistan and FATA, are the most dangerous areas for journalists." 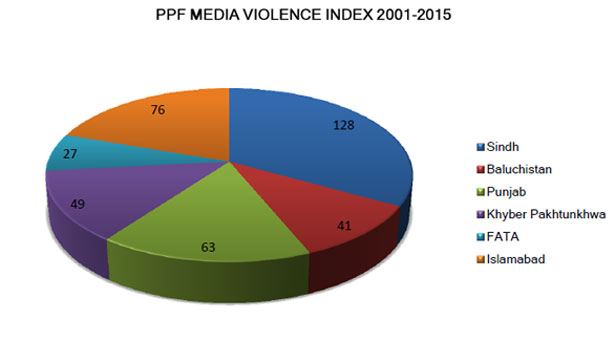 "Pakistani journalists are not only targeted by militants but also by political, religious, ethnic and other pressure groups as well as the law enforcement agencies. Incidents of threats, attacks and killings of journalists in Pakistan are the clear evidence of how critical the situation is due to thriving culture of impunity," said the PPF.

As the United Nations marks November 2 as the International Day to End Impunity for Crimes against Journalists, the world comes together to reaffirm its commitment to ensuring the safety of journalists throughout the world. The day serves to remind us of unresolved crimes against journalists, and draws attention to unsolved cases where violence has been used against journalists who are simply exercising their freedom of expression and duty of reporting.

Last year, the Committee to Project Journalists (CPJ) expressed the hope that the conviction of six people responsible for the assassination of Geo TV reporter Wali Khan Babar would mark a turning point for Pakistan's journalists. However, the number of open cases of violence against journalists in Pakistan has only increased in the last year.

According to an editorial published in The News, new cases of violence against journalists have occurred amidst the government's failure to implement its commitment to protect journalists in the line of duty.

"Journalists continue to report threats from a number of sources – political parties, criminal groups, local mafias, terrorists and state security agencies. This means that Pakistan is in fifth place behind Somalia, Iraq, Syria and the Philippines in the index for countries where journalists are killed and the killers go free," read the editorial. 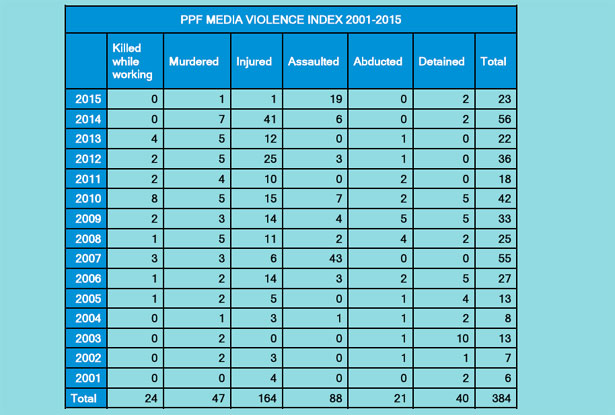 Karachi: No action taken against man for aerial firing, showing off weapons

Govt to maintain ban on TLP