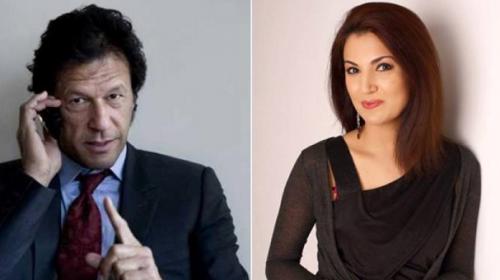 LONDON/KARACHI: According to claims made by a British newspaper, Imran Khan divorced his wife Reham via SMS, which she received upon landing at Birmingham airport after a long flight from Pakistan.

According to the Daily Mail, the marriage which was first reported to be an amicable parting, was anything but. The couple it is reported had "furious rows over everything” from Imran’s friends to her banning his dogs from the bedroom.

Reham it is said received the text message communicating divorce when she stepped off the airplane. The paper claims that she was given a confirmation by Imran Khan’s chief of staff.

Citing and unnamed source the paper claims, the divorce was an attempt to counter any fight-back from Reham, who was “shaken and clearly upset” upon receiving the news.

The marriage which lasted about 10 months, saw Reham become bigger news than Imran Khan and the paper’s report cited a family insider who put the blame on Reham’s shoulders alleging “She made his life a living hell. The wonder is that things dragged on for as long as they did.”

With the slowly revealing story of jealousy, political ambitions and a battle for keeping the dogs out of the bedroom it is clear that the divorce was nothing like the initial amicable parting stance conveyed by the Khan’s to their fans.