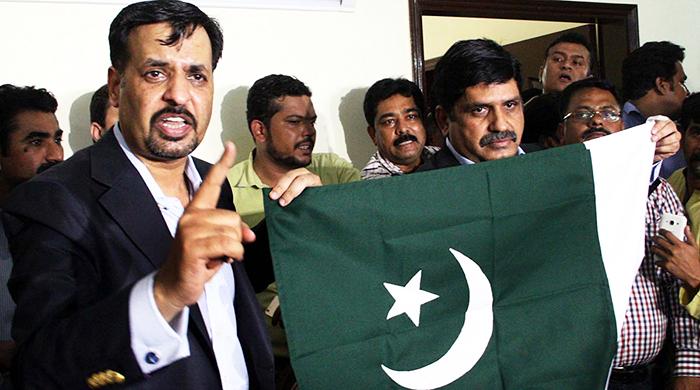 KARACHI: In a fiery tell-all press conference upon his return to Karachi, former city nazim Mustafa Kamal on Thursday announced a new party in a direct challenge to the Muttahida Qaumi Movement (MQM).

Flanked by former fellow MQM colleague Anees Qaimkhani, this was the first media appearance by the two leaders after a prolonged absence from local political scene and rifts with the leadership of their former party, the MQM.

Addressing the media at the press conference in Karachi, Kamal lashed out sharply at MQM chief Altaf Hussain, with whom the former Karachi mayor has had a falling out since years since he left the party and moved to Dubai.

Before starting a presser which lasted for nearly two hours, Kamal told those present that the agenda of his press conference would be split into three parts, where he would outline why "I and Anees left the party. Second, why we have come back, and what we will do next.”

Kamal accused Altaf Hussain of insulting party workers several times in public meetings, especially once in May 2013 when he changed the party set up overnight.

What was first done in private settings was being done in public through media channels, he said.

He recalled how the MQM Rabita Committee was manhandled by people when the PTI secured 800,000 votes.

He also revealed that a time came when former Interior Minister Rehman Malik would dictate the press releases for MQM, adding that Malik had access to the MQM chief even more than MQM leaders.

'We have come to rebuild'

With tears in his eyes at one point, the emotional leader demanded to know why children of MQM workers continue to bury their fathers. He demanded to know what the agenda is behind all these sacrifices. “Is it to help fund Altaf Hussain's alcoholism, to finance their properties and wealth abroad?” he asked.

"We were a civilized community. We have now been reduced to RAW agents," he said. "What do you want us to see? More arrests? Torture? Martyrs? I agree you have to give sacrifices in movements. We are willing to sacrifice ourselves. But tell me what for?"

Kamal minced no words when claiming why he left the MQM after he realized that all his efforts and hard work was not for the benefit of the people but to fund the ills of one man.

“We have returned today because every child of Pakistan, every party, the establishment of Pakistan as well as the present and past government s know, that Altaf Hussain has links with the Indian intelligence agency RAW,” he alleged.

“When Dr. Imran Farooq was martyred, and the Scotland Yard started gathering evidence from his residence; they took away a truckload of evidence from his (Altaf’s) residence. For six or seven months, the investigators studied the evidence and documents that they had collected. Then they summoned the members in London, including Altaf Hussain who was interviewed for three days,” he said..

Mustafa Kamal claimed that during the Scotland Yard interviews, they were asked whether they were taking funds from India.

He added that all the individuals denied the allegations for at least 10-15 minutes and then the Scotland Yard began serving them documentary evidence proving all the allegations that they had just denied.

Kamal claimed Altaf was misleading the people of Pakistan that “since he has raised his voice against the establishment of Pakistan, he is being cornered and silenced”.

He added that the low level workers of the party, “the unit in-charges, the organizational committees – none of them know the truth and are buying into the lies, believing the Rangers are doing a great injustice to their leader and the party.”

He claimed that Altaf has been lying to and misleading the people who support him and the party.

He added that, while Altaf Hussain was misleading everybody, senior party leadership was summoned to Dubai and were apprised about the allegations which had been accepted before the Scotland Yard.

“Did Saulat Mirza have any personal dispute with Shahid Hamid? Who made Saulat Mirza the murderer of Shamid Hamid. Ajmal Pahari, who made him a terrorist?" he said, visibly in tears.

"These killers of Imran Farooq that you see on TV. Look at their faces. Has Altaf ever thought that these killers also have mothers? Did he ever think that their sisters would also need to be married off? That their siblings would need to be educated,"

“These youngsters were not terrorists. They became terrorists after joining this party,” he said.

A teary-eyed Kamal asked how the Urdu-speaking Mohajir community that was known for its literacy and eloquence has been reduced to being labeled RAW agents. He stated that the RAW agents were made so by the Altaf Hussain's MQM.

“Giving instructions to party workers to go and train using weapons, why?” demanded Mustafa Kamal. He revealed that Altaf Hussain who never came to the party office for months, which was only minutes from his residence in London, was not going to return to Pakistan to lead anyone.

"We have come to save lives, to bridge the differences,” he said, adding that he was praying to the Almighty to bring Altaf Hussain back to the right path.

He urged Altaf Hussain to seek forgiveness from the Almighty.

Kamal appealed to the establishment to see the Urdu-speaking community in the same light as the rest of the loyal citizens of Pakistan. He appealed that the community was not disloyal to the state and pleaded that they be brought back to the fold so they could help build the country.

Kamal and Qaimkhani unfolded and displayed a Pakistani flag to the press, saying that this would be the party's flag.

Mustafa Kamal dispelled any notion of likening his return to that of Afaq Ahmed and others who he said had come under the protection of others. Responding to a question about being on the wanted list Anees Qaimkhani rejected the rumours, stating that wanted people are on the run they do not come out in the open.