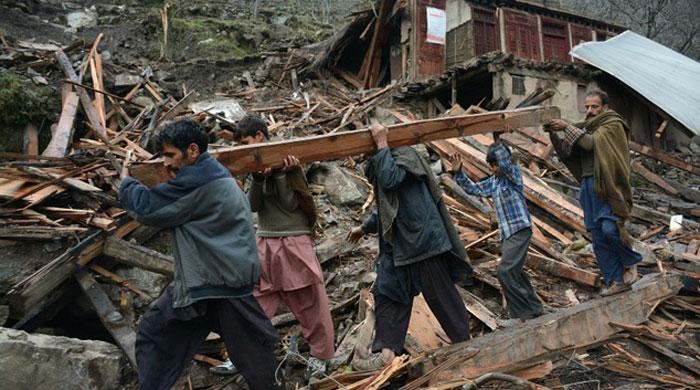 CHITRAL: Rescuers in northern Pakistan have found the bodies of two schoolchildren buried under a landslide, while nine more children are said to still be trapped underneath the snow and rubble.

The disaster struck on Saturday afternoon near the village of Susom, some 40 kilometres north of the town of Chitral in Khyber Pakhtunkhwa province, local police station chief Sultan Baig said.

According to reports, worried parents and authorities began searching for the ninth graders when they did not return from school.

"The chances of finding any survivors are very low," said local administration official Mohammad Ali. "But you never know. People have been found alive buried under snow for nearly 20 hours."

According to the provincial disaster management authority, heavy machinery was not being used to remove the snow due to fears of further land-sliding.

Separtely, at least five people were killed after heavy rains caused roofs of multiple houses to collapse in Faisalabad and Charsadda.

Heavy rains have killed at least 79 people, injured 101 others and damaged 240 houses since March 9 across Pakistan, according to the National Disaster Management Authority. It said landslides and collapsed roofs caused most of the fatalities.

Poorly-built homes, particularly in rural areas, are most prone to collapse.

Severe weather hits the country every year, with hundreds killed and huge tracts of prime farmland destroyed in recent years.