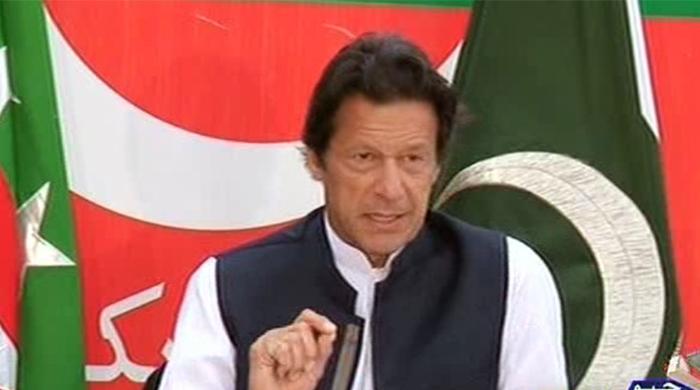 In an ‘address to the nation’ from his Islamabad residence Bani Gala, Khan also demanded that the government should form an inquiry commission led by the serving chief justice of Pakistan. “The commission should also include white-collar crime experts and an audit firm that follows the trail of money to determine where it leads,” he added.

The PTI chairman gave the government time till April 24 to take an appropriate action over the issue, after which he added he will announce a future course of action.

The PTI chief said they will march on Prime Minister Sharif’s residence in Raiwind instead of Red Zone in Islamabad.

“Dharna had to be abandoned because of an incident, but I promise you all that I will not back down this time around.”

Imran Khan said Pakistan was heading towards disaster but ‘by the grace of Almighty, the nation has got an opportunity to turn the country's course.’

He said Panama Leaks was not a conspiracy hatched by his PTI party but it was an international affair in which several key diplomats, politicians and government officials had been named. Many democratic countries launched probes immediately after the release of Panama Papers, he added.

Khan said people need to stand against oppression and injustice as it was every Pakistani’s responsibility to protect the country. “Nations head towards disasters when they don’t stand for justice,” he added.

The PTI chairman regretted that the state-run PTV did not cover his speech at an specially convened session of the National Assembly over Panama Leaks. He said the prime minister told lies during his televised address to the nation.

“I should’ve been given the opportunity to address the nation on PTV as well,” he added.

The PTI chief went on to say that Panama Papers have mentioned offshore companies being owned by PM Nawaz and his sons, Hasan and Hussain.

Khan said he is one political leader of the country who does not have any case registered against him. Hurling allegations is the government’s way of defence and Shaukat Khanum Memorial Trust was being targeted to save corruption of the rulers, he added.

He said Nawaz Sharif did not inform Election Commission of Pakistan (ECP) about his offshore companies and didn’t even declare assets in his family’s name.

The PTI chief went on to say that Najam Sethi was rewarded with PCB chairman post for allegedly helping the N-league rig the 2013 general elections. Saeed Ahmed was also rewarded with a key State Bank seat for launder money for Nawaz Sharif, he added.

“How did he [PM Nawaz Sharif] earn billions by paying taxes in thousands?” Khan questioned. “Mian sahib you have never played cricket with neutral umpires.”

Calling separate laws for poor and rich in the country a great injustice, Khan said Pakistan should have equivalent laws for all.

PM Imran sees an 'industrial Pakistan' in the years to come

No constitutional provision to carve out Karachi from Sindh: CM Murad