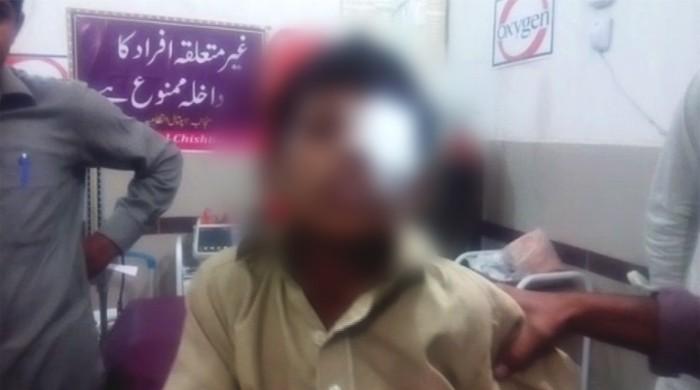 BAHAWALNAGAR: A teacher at a private school here in District Chishtian allegedly tortured a Grade 7 student for coming unprepared into the class, inflicting severe injuries on the child's head and eye.

The student, thereafter, was transferred to the Tehsil Headquarter Hospital Bahawalnagar.

A case has subsequently been registered against two teachers, police said. The security officials added that instructors at the Chak 51 Fateh area school had reportedly engaged in beating the 7th-grader with sticks for turning up in the classroom without preparing for the day’s lesson.

One of the kid’s eyes was badly wounded in the thrashing. Although doctors at the THQ Hospital Bahawalnagar administered first aid to the torture victim, they advised shifting him to Bahawalpur Hospital for the fear that the student might lose his eyesight in the hurt eye.

The kid’s father revealed the school’s administration tried hushing up the issue.

Following the incident, SHO Bakhshan Khan Saifullah disclosed that a First Information Report (FIR) has been registered as per request of the victim’s father. “Further investigation is currently underway,” he added.

The torture continues without fear

A school teacher in April 2017 reportedly beat a fourth-grade student at Garhi Hameed Gul School in Charsadda, after which the kid was shifted to the DHQ hospital for medical attention.

While a case was filed against the perpetrators on the parents’ request, District Education Officer Siraj Ahmed took notice of the incident, saying two teachers were suspended over the allegation. A probe into the matter was launched.

In addition, 14-year-old Mohammed Ahmed – a student at Larkana Cadet College – lost his senses, when a teacher strangulated him late last year, breaking sensitive bones in his neck. The kid lost his ability to speak and suffered a paralytic attack that left his limbs motionless.

Pushed forward with the help of Geo News’ reporting of the incident, Ahmed was sent to the Cincinnati Children's Hospital in Ohio, US in February through the help of provincial health department under CM Sindh Murad Ali Shah’s directive.

Ahmed successfully managed to speak his first few words on March 24 post-treatment, as observed in a video with Geo News, in which he is seen standing without support.

Is there a law?

A bill prohibiting corporal punishment for children in educational institutions was passed in the National Assembly in March 2013.

It declared any form of corporal punishment of children in academic institutions illegal, with those found to be involved in such acts to be sentenced to a year in prison, fine worth Rs. 50,000 or both.

This issue was highlighted on Geo News’ program Chal Parha, which prompted action from the Punjab CM Shahbaz Sharif.

Harmful parenting behaviours [including that from school teachers] that may not be classified as maltreatment per se have this association with (mental) disorders,” Lisa Berlin, who studies parenting and child maltreatment at Baltimore’s University of Maryland School of Social Work, told Reuters in 2012.

A study in the same year mentioned that people with a history of harsh physical punishment were more likely to have a range of mood and personality disorders or to abuse drugs and alcohol.

“Spanking and other forms of corporal punishment have a huge variety of negative outcomes and almost no positive outcomes,” said Michele Knox, a psychiatrist who studies family and youth violence at University of Toledo’s College of Medicine.

Eid-ul-Fitr in Pakistan: Ruet-e-Hilal committee to meet Wednesday for sighting of moon

Schools, colleges, universities to remain closed till May 23 in Pakistan: NCOC