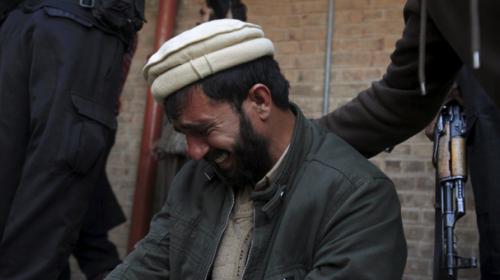 PESHAWAR: A suicide bomber attacked a government office in northwestern Pakistan on Tuesday, killing at least 26 people and wounding more than 70, officials said.

The attack targeted a branch of the National Database and Registration Authority (NADRA), which issues government ID cards, in the city of Mardan in Khyber Pakhtunkhwa province.

“A suicide bomber riding an explosives-laden motorcycle hit the Nadra office in Mardan where a large number of people were standing in queues,” police officer Naeem Khan told Reuters.

At least 23 people were killed and about 75 were wounded, more than 25 of them critically, Bilal Ahmad Faizi, spokesman for Rescue 1122 emergency responders had earlier said.

A Nadra employee, Mohammad Tariq, was inside when he heard the huge blast outside the office premises.

“We are still inside the office, and the police and rescue workers are busy in their work,” he said.

Police officials said that the security guard at the office gate died on the spot.

Dr Haris, district emergency officer in Mardan, said all injured had been taken to the Mardan Medical Complex and the Mardan District Hospital for emergency treatment.

Even during Eid holidays, Imran Khan is obsessed with Shehbaz Sharif: Marriyum