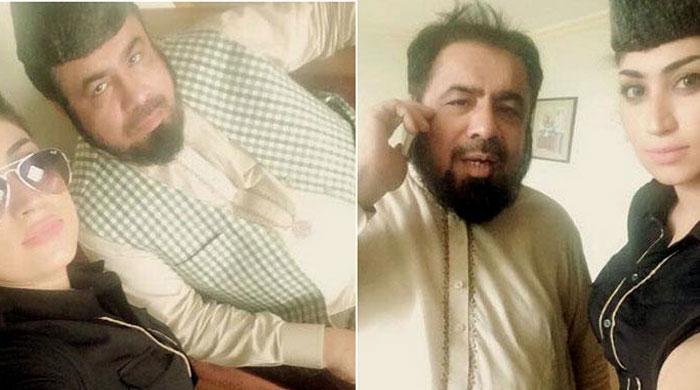 MULTAN: The mother of slain model Qandeel Baloch said Monday that prominent cleric Mufti Abdul Qavi, who made headlines last month for appearing in a controversial video with the social media star, provoked her son into murdering her daughter.

On Sunday, police arrested Qandeel’s brother Muhammad Waseem, who admitted to strangling her to death for the "honour of the family". Waseem said he gave her a 'tablet' to subdue her and then strangled her in their family home over the weekend.

Waseem said he killed his sister due to her social media activities, which included a series of posts with the prominent cleric, Mufti Abdul Qavi.

One video showed Qandeel shaking hands with Qavi as she sat on the arm of a sofa by his side. Qavi was suspended from the Ruet-e-Hilal Committee in the controversy following the video posts.

She claimed her son Waseem carried out the murder on the advice of Mufti Qavi, and that the cleric provoked him into killing Qandeel. She claimed Waseem was also in contact with Qandeel's former husband Ashiq Hussain.

Meanwhile, Mufti Abdul Qawi reacted to news that he would be investigated in Qandeel Baloch's murder case by saying that he was willing to cooperate if approached by the police.

He said that it was "ridiculous" that he had been included in the murder investigation when the murderer had already confessed to the crime.

Earlier today, police announced that Mufti Qavi would be included in the murder investigation of the slain social media sensation.

"We have decided to include Mufti Abdul Qavi in the murder investigation," said CPO Azhar Ikram, the police chief in Multan where Baloch was killed.

"The scope of the investigation has been widened. The victim's brother, Aslam, will also be investigated. We are waiting for the forensic reports," said the CPO.

"As per our initial investigation 'honour' is the motive of murder," CPO Azhar Ikram said earlier.

Prior to her death Baloch, whose real name was Fauzia Azeem, spoke of worries about her safety and had appealed to the interior ministry to provide her with security for protection.

No help was provided and the interior ministry has not commented on her death.

In Facebook posts, Baloch, 26, spoke of trying to change "the typical orthodox mindset" of people in Pakistan. She faced frequent abuse and death threats but continued to post provocative pictures and videos.

The so-called 'honour-killing' has sent shockwaves across the country and triggered an outpouring of grief on social media for Baloch.