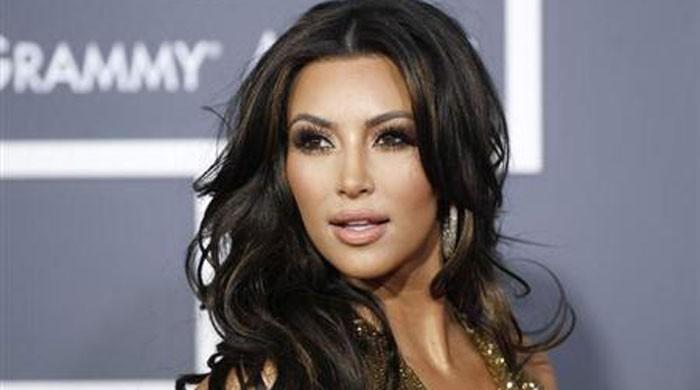 PARIS: A French newspaper Sunday published Kim Kardashian's testimony to police of how a robber threatened her at gunpoint when she refused to hand over a ring worth millions of dollars.

In the account of the Paris robbery she described how she was bound and gagged and said one of the gang was wearing a jacket emblazoned with police insignia.

The Journal du Dimanche said it had exclusive access to the handwritten report based on Kardashian's account, in which she said that the robbers seemed "inexperienced".

The newspaper also said it had a transcript of a brief interview given to police after the masked men burst into Kardashian's luxury residence in October, taking jewellery worth nine million euros ($9.5 million).

Police last week made arrests in Paris and the south of France and 10 suspects have been charged, including the alleged ringleaders.

In the Journal du Dimanche report, for which the newspaper did not provide English quotes, Kardashian, 36, said she heard noises at the door after returning from dinner after midnight.

Her bodyguard was absent, guarding her sister Kourtney at a nightclub.

"I saw through the sliding door two people coming," Kardashian said in comments translated from the newspaper's French account, adding that one of the men was wearing "a jacket with 'police' written on it".

"He asked me with a strong French accent where my ring was. It was on the bedside table. (But) I replied that I didn't know and then he pulled out a gun and I showed him the ring," she told police, adding it was worth four million dollars.

Kardashian told police the men tied her up with plastic cables and adhesive tape "and they carried me to my bathroom" where they placed her in the bathtub.

The wife of Kanye West said after the gang had put her in the bathroom that she heard the men talking to each other in French and had the impression they were saying they should leave.

Once they had fled, Kardashian managed to free herself -- she told police she could tell the men were "kind of inexperienced in the way they tied me up".

The alleged mastermind, 60-year-old Khedache has been charged, along with nine others.

Investigators have told AFP that he had gone on the run six years ago while on trial for drug trafficking offences.

In September last year, an acquaintance gave him "a tipoff worth its weight in gold", according to one investigator -- that Kardashian and her entourage would be staying at a discreet apartment-hotel complex in Paris's chic Madeleine district to attend catwalk shows during fashion week.

He recruited Dubreucq, 61, who had previous convictions for robbery and drugs.

His own client left traces of his DNA on the plastic cable and the tape they used to tie up Kardashian.

Khedache "has admitted taking part in the robbery but has refused to speak about any accomplices and denies he was the mastermind", Lienard said.

He told Lienard that the jewellery was passed to another party. Khedache was seen in the Belgian city of Antwerp, one of the world centres of the diamond industry, with another suspect, 64-year-old Marceau Baum-Gartner, a few days after the robbery.

French police had placed other members of the gang under surveillance and spotted four of them meeting up at a Paris bar in December.

Investigators believe they were discussing how to divide up the spoils of the robbery. Around 250,000 euros was found in the police raids last week.

J.K. Rowling cheers up disappointed Pakistani kid by heaping praises on her art