LONDON: Award-winning British filmmaker Asim Abbasi has said that his directorial debut feature film titled ‘Cake’ highlights the realities of family life in Pakistan’s rural and urban areas and the conflicts that define these realities.

The former London School of Economics graduate, who quit investment banking to turn a film-maker, told Geo News at the London shoot party of ‘Cake’ that this film is about responsibility and choices in life. The film stars Aamina Sheikh, Adnan Malik and Sanam Saeed are in lead roles.

Interestingly, Imran Khan’s friend and London-based property tycoon Sayed Bukhari (known as Zulfi Bukhari) is the Executive Producer of ‘Cake’. He said: “I have been watching the evolution of Pakistani cinema over the last five years and I am excited to be a part of this UK and Pakistan collaborative project with Asim Abbasi.”

He said that he had decided to become part of the film project to play his part in encouraging Pakistani cinema, especially the new generation of artist and filmmakers who are doing amazing work and have aspirations for their growth with intent to help the revival of cinema in Pakistan. Mahnoor Amna Mahmood is the Associate Producer. 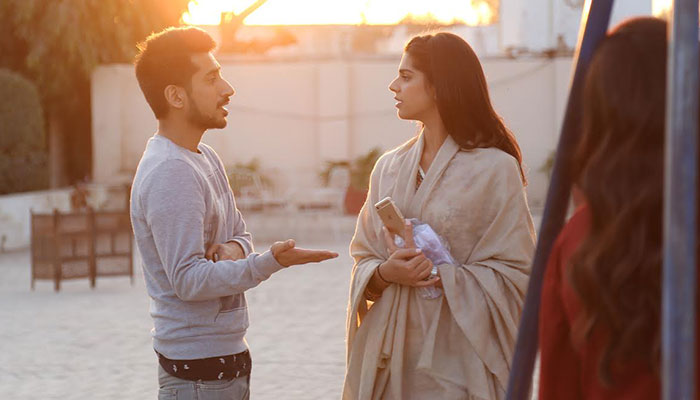 Cake’s cast, crew and members of the film were hosted at a top Mayfair hotel to celebrate the film’s London shoot. Some of the most prominent faces of London’s hip social scene turned up to show support for the event including Ashley James, ex ‘Made In Chelsea’ star, Peter Virdee, British Asian businessman, and Amit Bhatia, British Asian Businessman and son-in-law of Lakshmi Mittal.

Set in the present-day world of Karachi and London, the film tells the story of two siblings who are forced to reconnect and confront the wounds of their past and realise that sometimes the only way for a family to move forward, is by finding a way back. The film offers a heartfelt look at the realities of life and death, of past and present, of choices and consequences. The film unfolds a story about the passage of time seen through the eyes of one family member to another.

Sanam Saeed attended the event and spoke about her role in the film. She said filming in London adds colour and international angle to the film and shows how Pakistani families now span many places of this world and are connected with the global diaspora. She said the story unravels layer by layer and all the actors enjoyed working together on the film set. She said that Asim Abbasi put in a lot of effort for the film and ensured that the film completed within the time frame and the allotted budget.

Glamorous Ashley James drew the attention of the audience in particular as she mingled with the guests and welcomed to London the Pakistani stars.

Meghan Markle accused of plagiarising a quote from Netflix documentary